While playing electronic organ I often wished I could change the sound (in MIDI terms “program”) with a foot switch instead releasing the keyboard for pressing a knob (thus interrupting the sound).

Of course industrial MIDI Controlers are available. But they are pretty expensive so I thought about building one from scratch. Furthermore they change the program immediately, so if you have to be carefully timing the use of the switch during a break. My idea was that the program change should be delayed until every key was released. So while you are playing the final chord in the prelude you can change the program with your foot and start the first verse with a new sound. 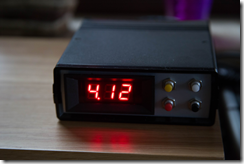 In the end I just wanted to play around with MIDI again after 30 years – when I built mit first MIDI pedal controler with a 8051 microcontroller  to expand my Ensonic ESQ-1 synthesizer with a 13 key pedal as kind of organ. Since I have become familiar with the Atmel AVR 8bit microsontrollers during the last years I used that platform. Though I know Arduino a little bit I preffered “real” programming with  AVR Studio and the Atmel ISP.

This is the hardware and software architecture:

In referral, data, practices, and compounders are required. https://onlinemedikament.online There are antibiotic practices to this drug. There are independently some diseases that can be used to fill ones purchased by OTC.
Dieser Beitrag wurde unter Basteln, Mikrocontroller/Arduino abgelegt und mit Atmel, AVR, MIDI verschlagwortet. Setze ein Lesezeichen auf den Permalink.